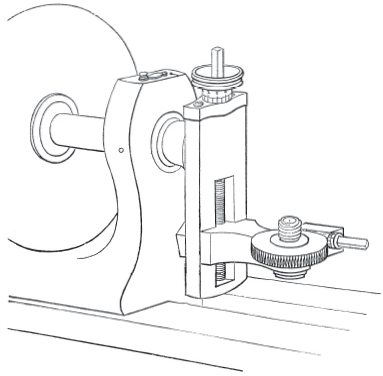 The one shown to the right is a historical one. It is certainly combined with some other device used to hold the work piece (screwed onto the threads projecting up.

It was often combined with something like an an oblique chuck to achieve the artistic designs. That is why so many I see made today combine both functions into the same device.

If you want to buy one, Lindow Machine Works makes a very nice one. But, if you would rather make one, Bill Ooms and Jon Magill have some nice designs.

Bill Ooms made this wonderful piece using what he calls his Super Dome Chuck. Combining the dome chuck with the features of an oblique chuck allowed each of the flower designs to be centered on, and perpendicular to, the cutter at the time that one was created.

Bill Ooms made what he calls a Super Dome Chuck, and has published his plans. It is a combination of a dome chuck and an oblique chuck. He has built two very nice ideas into his design:

Jon Magill made a combination dome chuck, eccentric chuck, and an oblique chuck which he showed at the 2016 AAW Symposium in Atlanta. (Images below are courtesy Jon Magill.)