Automated movements include simple activities like using rosettes to drive headstock (or cutter) motion, or such automation can get much more complex like driving a lead screw to move a cutting frame along a curvilinear slide.

Historically, that automation came in a mechanical form. 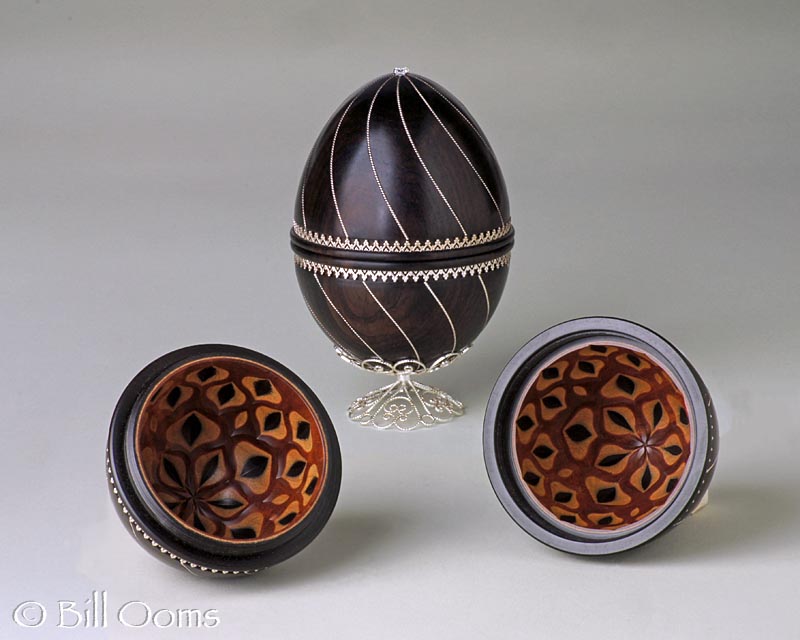 Tri-Layer Box
Made using a Computerized Ornamental Lathe
Image courtesy Bill Ooms
In 1722 we see the appearance of what is commonly referred to as "the mother of machine tools", the lathe. The lathe is credited with being the first machine tool that led to the invention of all subsequent machine tools. Though it actually dates back to Ancient Egypt circa 1300 BCE, it wasn't until 1722 that the lathe was first mechanized in the form of a horse-powered horizontal boring machine.
By the 1800's the Industrial Revolution was in full swing. A heavy emphasis was placed on increasing factory productivity resulting in a transition to new, automated processes. In the textile industry, cotton spinning became mechanized - powered by steam or water. In the paper industry a machine for making a continuous sheets of paper on a loop of wire fabric was introduced. Known as the Fourdriner, the machine is still used in paper production today (though it has experienced many substantial upgrades over time). Influenced by the Fourdriner, the method of continuous production lead to the development of continuous rolling of steel and iron.
From "A Brief History of Automation" on Product Handling Concepts' Words in Motion blog (2019).

So, whilst it was more of a mechanical form in the past, it is being done more often by electronic means. Stepper motors are better than variable frequency drive (VFD) motors for certain activities as they can deliver more torque at lower speeds. But stepper motors require more automation controls that VFDs don't.

Once these automation controls have been implemented, they can be used to automate other functions. One I've seen is to add a second stepper motor for the movement of the Cutting Frame about the Y axis, creating a Spherical Slide.

This YouTube video was given by Jon Magill at the 2018 Ornamental Turners International Symposium. It shows Jon's approach to making organic curves with ornamental turning. In it, he has added a bit of automation using stepper motors.

There are some in the community who say that the use of CNC or any other electronic means is too much. To me, this is similar to the discussion about using hand tools for making furniture. Some (especially those at Colonial Williamsburg) work only with hand tools whilst others have moved to full use of CNC machines for cutting the parts. Most are in the middle somewhere.

My opinion is that we should look at the work of the artist, rather than the means.

You need to make your own decision about how much automation you want to use. My ask is that you do whatever keeps this fun and exciting for you. It should be something you really enjoy doing, not a chore.