The overhead drive is one of the most common methods used to drive the cutters used in ornamental turning. (Cutters would be held in either a cutting frame or a Drill Spindle.)

The benefits of using an overhead drive over a direct drive are :

The motor to use for the overhead drive is the next thing to consider. It should be powerful enough to drive the cutter when cutting very hard woods, and turn it fast enough to make the cuts. But it can't be too fast or the belting will jump off the idler pulleys.

Generally, the guidelines recommended are :

One motor which is commonly used is from Penn State Industries - the Variable Speed Midi Lathe Conversion Kit. Another is the Sherline Variable speed motor.

If you chose to repurpose a router for this use, be sure to put a speed controller on the power feed. Rockler sells one, item number 25278. These work by changing the frequency of the power. Be aware of these things if you incorporate this into your design:

Using a router is not recommended. A belt is needed for the overhead drive motor to drive the cutter.

I use round belting from McMaster-Carr, part number 59725K729. It is made from polyurethane rubber, is 1/8" diameter, and is orange (because I like the colour). It is sold by the foot.

Other types of belting are available, and they all have plusses and minuses, and varying costs. One common alternative is to use one which has a more rough texture. The argument made for this is that it doesn't slip as easily (though I've not had that problem, but others may have).

It will need to be replaced over time, but 20 or 30 feet will last quite a while. 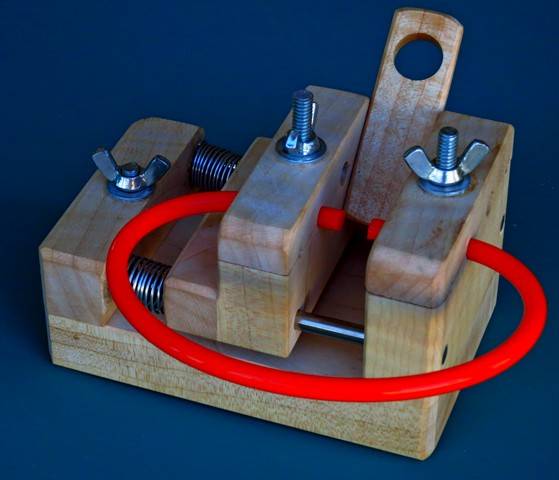 A forum user (who goes by "Sherweld") posted directions on the Ornamental Turners International forum for a jig that makes it much easier to weld the cable into a continuous loop. The picture to the right shows the ends being held in this jig, and are shown just before they were melted and joined. Melting the ends to join them is done using a soldering iron.

I made one of these jigs from a scrap piece of walnut and parts I bought at the local hardware store. The metal parts cost less than $10.

I've used this a number of times, and it has never failed me. This only shows the view from the inboard side, but the alignment when viewed from the near side should be similarly aligned. In that case, the cable should be vertical when halfway thru the movement along the Z axis. So, it you are planning to move the cutting frame 2", then at 1", it should be vertical.

The last thing to check is that the tension on the overhead cable is right. Static can build up from the overhead drive belt much like the belt does on a Van de Graaff generator. This can be alleviated by attaching a brush with brass bristles so that the bristles just barely graze the belt, and those bristles are also connected to an earth ground. An example of one is shown in the picture to the right. It should be noted that the brush needs to have brass bristles. Plastic ones will not work, and stainless steel ones are typically too stiff and are more prone to causing premature wear of the drive belt.

As mentioned, the wire shown in the picture to the right is connected to an earth ground. Mine is wired via the ground pin on an electrical plug. Others in the USA have told me they do the same, however you will need to ensure your electrical code requirement where you live.

Note 1: It is a good practice to bond this grounding to the base for the machine also (on the MDF Rose Engine Lathe, bond to the metal plate on the top).

Note 2: Some have mentioned that certain types of drive belts do not accumulate static electricity as much as others. I have no experience with this, and can only add that grounding the wires as mentioned is a good practice.