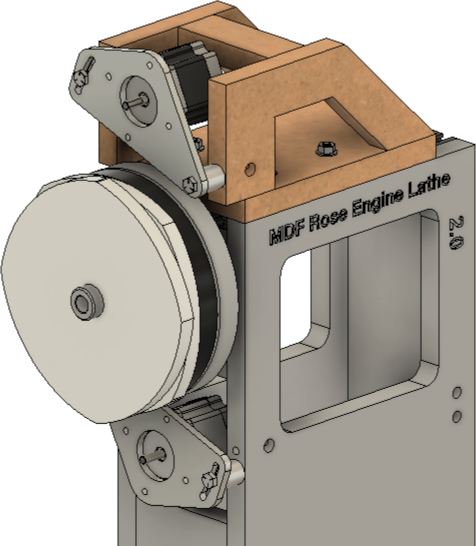 Ed French then added the functionality to use this in version 3.0 of the Control System for Multiple Stepper Motors (more information about that system is available at the MDF Rose Engine Lathe 2.0 Library).

Together, these deliver these functions for the turner:

With the historical way in which phasing has been implemented, a series of cuts would be made, and then the rosette would be rotated (phased) relative to the object being cut. This certainly enabled some wonderful artistic effects.

With dynamic phasing, there is no need to stop the cutting before phasing.

An example of where this function would be useful is when cutting along the side of a piece using a linear or curvilinear slide. As the cutter is moved along the piece, the rosette can be phased dynamically. The effect would be to impart the rosette's design helically along the object, similar to screw threads. The picture to the right shows an oval rosette with three multiplication factors, all using the same starting point.

Below are some examples using an F-4 rosette:

This opens up opportunities for the turner to have access to previously unavailable rosettes.

Rosettes with different lobe structures have different amplitudes. For example, an F1 at 400% is very different from an F4 at 100%.

If the turner wants to adjust the rotational alignment of the rosette to the object being turned, there are a number of ways to do that; however the approach here is easiest. The steps would be:

An example of where this function would be quite useful is when adding ornamentation to a segmented or staved piece. The piece can be rotated so that the pattern imparted by the rosette would start wherever the turner wanted.

The instructions for making one are in a manual at the MDF Rose Engine Lathe 2.0 Library. There is a red book there titled, Jigs, Fixtures, & Add-Ons.