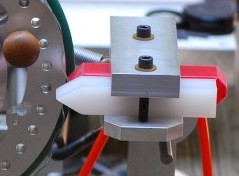 Rubbers (sometimes called touches) are so called as they rub against the rosettes. The terms are interchangeable, but touch is preferred by some.

A rubber works fundamentally the same way a cam follower does on an engine, except in the opposite way.

Two are shown in the picture to the right : the red and white pieces of plastic (only the red one is engaged with the rosette at this time).

Rubbers come in various forms or shapes, and each can produce a different result. Commonly used ones are : 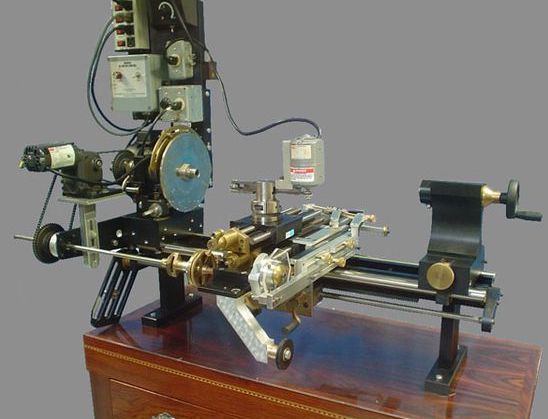 On a typical rose engine lathe, as the shaft rotates the object and the rosette, the rosette moves against the rubber, moving the shaft. The rubber stays fixed, making the whole headstock move according to the rosette's shape. As shown, this would cause a rocking motion.

I say "typical" as there are a class of rose engine lathes which have a fixed headstock, and the cutter moves according to the rosette. This is the Pudsey-Dawson approach, and the Paul Cler lathe is an example of this.

Recently, this approach is becoming more prevalent with the ready availability of linear bearings at a low cost. At the 2018 Ornamental Turners International Symposium, one demonstrator had a self-built rose engine lathe using this approach.

This YouTube video shows rocking movement, along with differently shaped rubbers. I don't know the language used; but the video does show the movement well.

Eddie Bell gave this presentation, variations on Gorst finial at the 2018 Ornamental Turners International Symposium. This is a nice presentation about the effect rubbers can have on the object shape.