The cutting frame is similar to a circular saw or a router in the way it works: It has a spinning cutter which is engaged with the wood to cut into it.

For use, it is usually held in a quick change tool post (QCTP), and the QCTP bolted to an cross slide (much like a metal lathe's tooling is held in the compound rest).

There are many varieties of cutting frames, but the first 4 listed below are the most used today:

There are two types of cutters,

These are triangular pieces of carbide held by a screw in the brass cutter head. They are similiar to ones used on a metal lathe. An example is shown in the picture to the right.

Advantages of using carbide cutters are:

A larger corner radius "blurs" the definition, and that may be what you want as an artist. However, a corner radius smaller than 0.007" will not necessarily give better definition. Those will amplify each and every striation in your cuts, making them look like someone dragged a rake over your workpiece.

Advantages of using fly cutters include:

The two shapes of these are: Some examples are shown to the right. 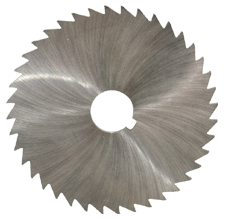 At the 2018 Ornamental Turners International Symposium, Steve White introduced the idea of using slitting saws in a cutting frame. These are the same saws that get used in milling machines for cutting slits in an object.

Steve's use of this was to cut a slit of a certain size (say, 1/16") along the Z axis in an object at various locations (e.g., every 90° around the circumference), and then insert a piece of contrasting wood into the slit. This is different from segments glued together with thin contrasting woods. In this case, the slits did not traverse the entire length of the piece, only a part of it. (I realize a picture would be great, and I'm working on getting one.) It is a great way to produce a uniformity and beauty that couldn't be easily done via other methods.

If you make your own, you will need belting for it (that is the orange stuff in the universal cutting frame picture, above). I used the same cable belting for this as I used on my overhead drive.

The cutter needs to be aligned on the centerline of the spindle as shown in the picture to the right. This can be achieved by moving the cutting frame (or drill spindle) up or down in the quick-change tool post.

You can test the cutter's alignment on the end of a piece and see how it matches up with the images of cuts to the left.

This is where the indexing function in the Control System for Multiple Stepper Motors comes in quite handy. Indexing the cuts 90° after each cut makes the alignment verification easy.

One recommendation is to affix a scrap of wood to the end of the object and make cuts into that. (It can be held there using double-sided tape.)

The directions for aligning the cutting frame and eccentric cutting frame are in the Lindow Rose Engine Alignment Procedures. There are a number of references, so be sure to read the complete document.

Sometimes you may want the cutter to be below or above the axis of the spindle to achieve your desired artistic effect. In that case, this step is even more important, though your target position for the cutter will be different.

The picture to the right shows a typical universal cutting frame from the side and the end. This UCF has a fly cutter.

The dashed lines show the two centers of rotation.

If the cutter's vertical alignment is not adjusted, the resulting cuts will be different than possibly expected. The picture to the right shows the effect of having the cutter aligned above and on the spindle's axis of rotation.

When I was getting started with ornamental turning, I asked how fast the cutter should be spun. The gentleman responded, "I run it as fast as I can without burning the wood."

It is common to use a variable speed motor like the midi lathe conversion kit from Penn State Industries for the overhead drive. To drive the belt, it is also common to use a multi-step pulley, with the pulley sizes at 4", 3", and 2" diameter. Based on that, the 4" pulley is used most often, and the 2" one almost never.

Additional notes regarding materials used in ornamental turning are captured in the materials section of this site.

Key Note: Cutting Frames are where the quality of ornamental cutting comes to life. If there is vibration in the cutting frame it will be transmitted to the cuts, and the quality of the work will be poor.

Cutting Frames are not hard to make if you have a metal lathe (or access to one). A milling machine is also useful, but not required.

One of Ed's designs includes the ability to handle small milling bits which can be quite useful for operations like cutting slots on the inside of a cylinder (e.g., a cricket box). This is the right angle cutting frame.
One common feature in the designs shown to the right is the ability to adjust the tension on belt that drives the motion of the cutting head. Ed achieved this by allowing for moving the idler pulley up or down as needed.