This machine can be used to make some really nice ornamentation on objects like pens, duck calls, wine bottle stoppers, etc. It is a very nice design and works quite well.

There are some features which make this a very useful option:

The newer model has swapped the ends so that you can more easily see what you are turning. There is also an adapter for holding the object via a collet.

This machine combines an Indexing Wheel, with a Reciprocrator, and a Curvilinear Apparatus.

Alas, Mr. Beall has retired and closed up shop. I understand that Lee Valley has taken over his product lines, so the Pen Wizard may be available from Lee Valley. 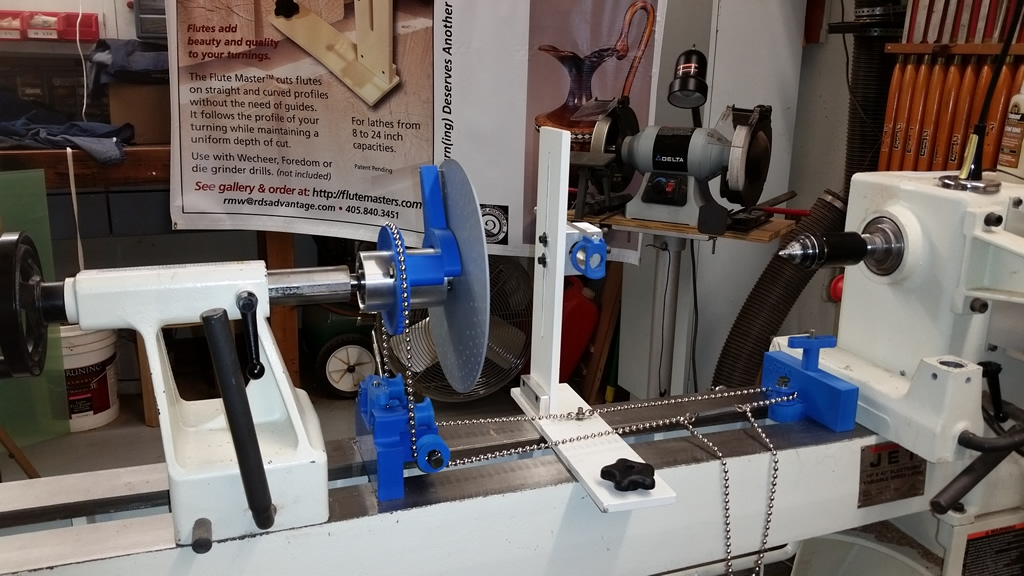 his jig enables the cutting of spirals on an object using the traditional lathe on which the object was originally turned. It comes after the success of the Flute Master, and they have even added a Variable Pitch Tool for spirals.

I've not used these jigs, but the brisk sales indicate they are successful for certain applications. One area where they probably excel is for larger vases/urns and columns.

As above, there are some features which make this a very useful option:

This jig combines an Indexing Wheel, with a Spiral Apparatus, and a Curvilinear Slide. 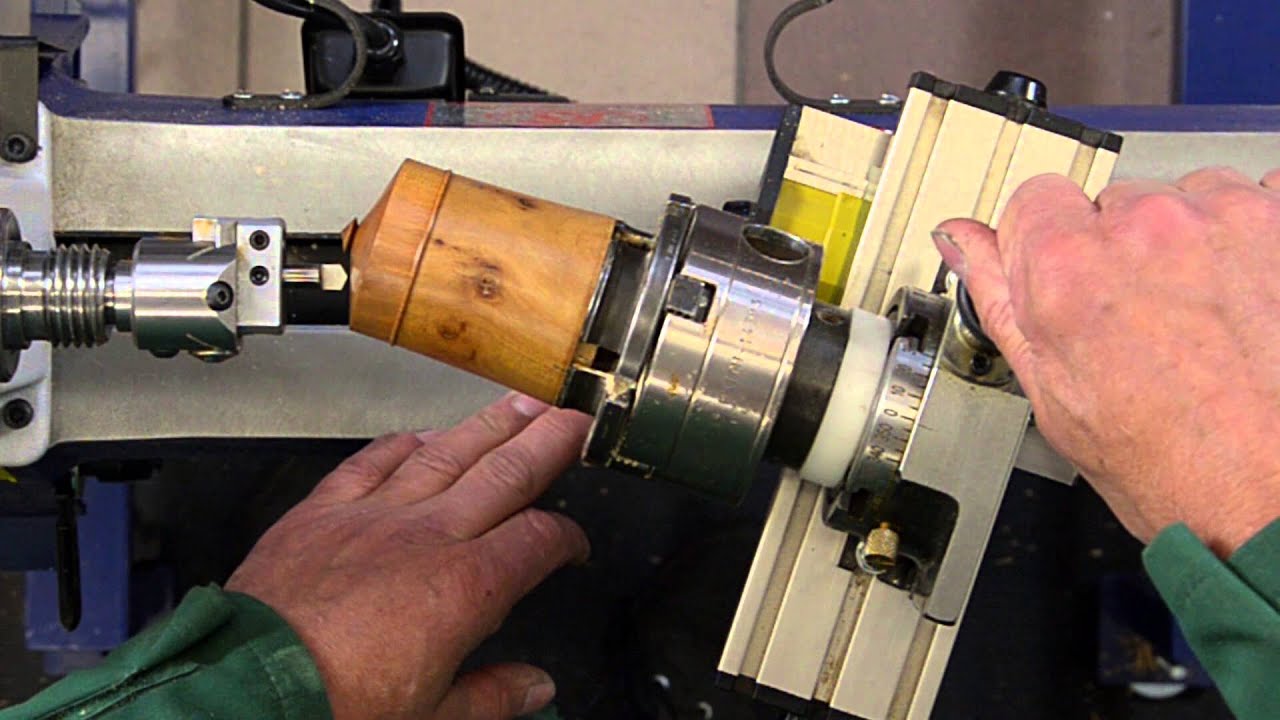 The JaHo Ornamental Turning Device is the brainchild of the Dutch turner Jan Hovens, and is sold by Dreschselbedarf, a German company. There is a good write-up about it on Bowl Maker.

I've not used this device.

Teknatool sold this device for a while, but have discontinued it. It is still available periodically as a used tool -- one sold for $650 on the AAW member forum in 2020.

I've not used this device. The Sorby RS3000 Ornamental Turning Device was designed by Martin Thompson-Oram and marketed by Sorby in the mid 1990's for just a couple of years.

The following was posted on WoodWorkForums.com in 2012:

The device is quite unique as an ornamental turner as the work piece rotates and the cutter reciprocates back and forth at high speed to create the patterns.
A magnet attached to the lathe spindle acts as a reference for a sensor and the micro processer controls the cutter in accordance with user defined parameters for, the pattern, number of elements to the pattern, from 6 to 24, the pattern offset and length of cutter stroke. The user controls the alignment and placement of the cutter "frame."
The cutter is actuated by a solenoid controlled by the microprocessor. In the photo from top left - box of cutters; the cutter assy / solenoid plus spiral lead; tool post with hose clamp height stop; cutter frame that fits to a horizontal flat plate tool rest which is missing (similar to a Sorby modular tool rest box platform); various tool posts; power leads and sensor plus lead; and the microprocessor unit.
To my surprise the unit is fully operational as I had set it all up, set the parameters, then turned on the lathe at a belt setting of 570 rpm ( Nova 3000 8 speed lathe). The reciprocating cutter works, but I could not make any trial cuts due the missing flat cutter tool rest. The missing item is merely a flat plate with one threaded hole for the modular tool posts, similar to a Sorby modular tool rest box platform.

It has been a bit of a unicorn, and I could not find much information about it. The sum of it is below.

I've not used this device, so I cannot speak to how good it is. In talking with Jeff, he said it was remarkably good, but added that he was probably going to sell it.

Update: In April 2022, Jeff Hankinson sent me some pictures of his, and also posted the video below on YouTube. He added these comments:

The Sorby RS-3000 Ornamental Turning Device was invented in the early 1990s by Martin Thompson-Oram in Britain. It is used to create attractive decorative cuts on the sides or ends of wood turnings. It is not a chatter tool. There is very little information available on the device since it also went out of production a few years after introduction. It is very easy to use, very quiet, and with practice can make very nice decorative touches on a turned piece. I am Not an expert with this. The piece of wood I am using is very dry and not particularly suited to this purpose. I thought I'd do a quick demonstration of the device for those interested. Sorry for the vibration. I mounted the tripod right on the lathe to get the angle.

This YouTube video, Sorby RS 3000 Demo, shows it in action.