Rosettes are cams, and they are used to produce the rocking or pumping actions needed on rose engine lathes. The rosette is truly what makes the magic happen.

It is now common to see rosettes which have phasing holes pre-drilled in them, removing the need for a crossing wheel. The advantage noted for using the phrasing holes in the rosette is that it takes a lot of the math out of the process as you don't have to calculate how much to move the crossing wheel to achieve the phasing you want.

Additionally, you are provided phasing outcomes which would be difficult to do otherwise (i.e., phasing a 7-lobed rosetted by half a lobe is difficult when 25.7° of rotation is needed.

Lastly, each rosette can be phased relative to another rosette, not just the object.

This opens up a whole new set of artistic options for the ornamental turner, AND will give more abilities to stay out of your spouse's way when you retire!

This is the approach that Jon Magill has purposefully taken with the design of the MDF Rose Engine. 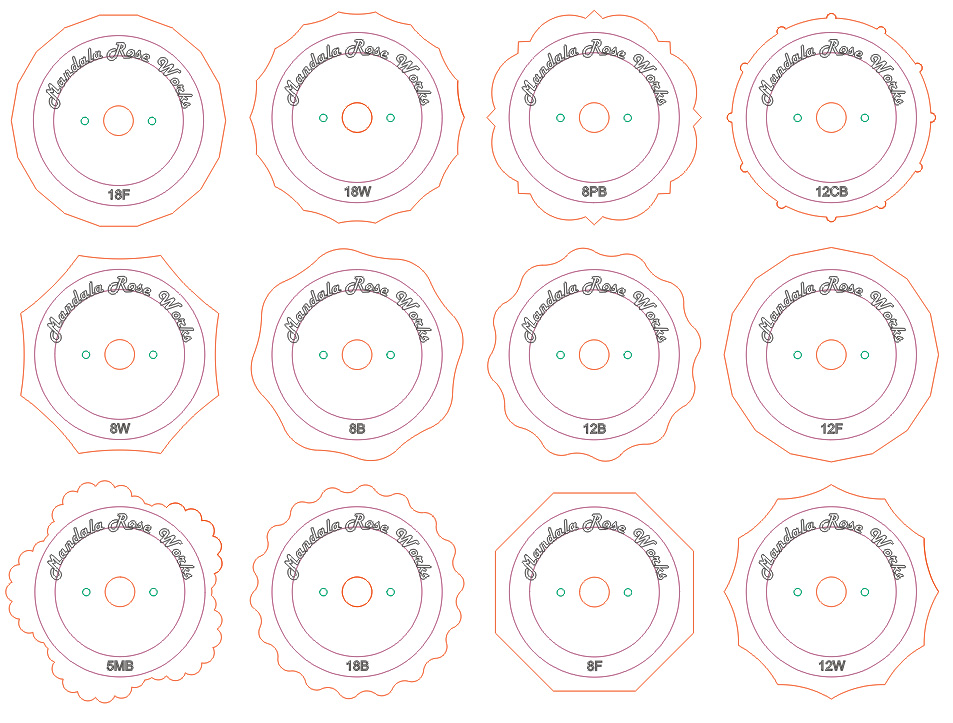 One of the really cool things about rosettes is that the piece can be made very differently using the various options with the given rosette on the rose engine lathe. For example: Lotus 8 Rosette
This is very evident with the plain-sided rosettes, which get rounded when the cut radius is larger than designed, and collapse in the middle when smaller. The picture to the right was produced using a paper chuck and shows a Lotus 8 rosette at various distances from center. It also shows how the design is "stretched out" as the distance increases from the center.
If that is not what the artist wishes to do, an amplitude adjuster can be used to compensate for this. I have had a little trouble at times deciding if I should phase the crossing wheel to the left or right. When I guilloché pen barrels, I phase up 6 rotations and then down 6 positions, I have found that if my mind wanders for a moment in ticking off my position on my list, indexing and then phasing, I have made an error in phasing direction. My little arrow rotates in the lower dowel and "points the way" to phase. I find that I am more efficient and accurate with this little jig.

Ornamental turners can make their own rosettes; however that requires :

This YouTube video is about the history, design, and production of rosettes. It was given by Jon Magill at the 2018 Ornamental Turners International Symposium. As you will probably note, this is not for the faint of heart. He lost me when he discussed Rectangular Lissajous Curves.

It is cheaper (and a whole lot faster) to buy pre-made rosettes than to learn how to design a rosette, and acquire a CNC milling machine. But, if you are seeking a reason to buy (and learn to use) a CNC milling machine, this is as good a reason as any. And, you can make rosettes that are very special-purpose in nature (Jon Magill designed a rosette which produces shamrocks -- very cool!).

I purchased acrylic rosettes from Mandala Rose Works (for the rose engine lathe I made from a Delta Midi lathe).

Ian Lane published an article titled, "Rosette Design and Fabrication" in the The Society of Ornamental Turners’ Bulletin #145, Spring 2022. That article outlines his use of OpenSCAD to design a rosette for 3D printing.

Colin Spencer published an update to Ian's article titled "Rosette Design and Fabrication Part 2", in the The Society of Ornamental Turners’ Bulletin #147, Autumn 2022. Colin used FreeCAD to design rosettes, gears, and rubbers. These were then printed on his Ender 3 V2 printer.

The web site, TurnSpain.com, outlines the Colin Spencer's "Home-made Rose Engine Lathe". The author also provides the designs for the rosettes he has crafted. This is the link for the STL files. As he notes, "each of the rosettes is 150mm in diameter with a 14mm central hole and the phasing holes are 50mm from the centre and 3mm in diameter. These can be printed in PLA on a 3D printer."

It is common for a rose engine user to make a new rosette on their rose engine lathe, using two other rosettes as the basis for that design. This new rosette then becomes the combination of the other two. An example is to the right.

There is a good web site, Traduction de l'Aide du logiciel CornLathe3, which has this convention outlined well, so I won't repeat it here. The page is partly in French, and partly in English, but you should be able to get the general idea. (By the way, a number of the earliest books on ornamental turning are in French, and there is a great school which teaches OT in southern France. So learning French could be a useful skill for OT, and for impressing your spouse!)
The overarching idea in the rosette numbering scheme is that the number represents a multiple of a base shape. Sometimes, the multiple doesn't really work well to produce a pleasing outcome. Using the F-1 as an example,

Final note: Not all rosette manufacturers follow the Holtzapffel scheme in labelling what they make, but they follow a similar scheme. And, there have been rosette shapes made since that time that follow their own naming convention.

My recommendation is to start with one of each of these rosettes,

and then move on to more complicated ones as you grow your skills and your understanding of where you want to go with the craft.