There are a number of approaches that could be taken to achieve ornamental turning. This page outlines the ones I know, and will probably trigger new ideas in the reader.

There are certainly exceptions to these, but these are good starting points for discussion.

The traditional approach to a rose engine is where the object rotates as on a traditional lathe, whilst also moving:

To make these motions happen requires movement that would not happen easily on a traditional lathe.

Rocking requires the head stock to rock back and forth. In the traditional approach, the headstock is mounted on shaft that provides for the rocking motion.

Pumping is lateral movement of the upper shaft in the head stock whilst also rotating. This would be a problem if the shaft were held in bearings, so it is typically held in bushings, or the shaft may float on a layer of oil (e.g., journal bearings).

Whilst all that object movement is happening, a cutter, held in a cutting frame (or drill spindle) is cutting into the object. The cutting frame stays fixed, held in the quick change tool post on a [cross slide]]. 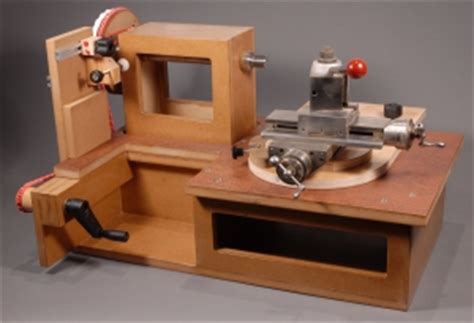 This YouTube video shows all these things happening together.

The MDF Rose Engine was designed by Jon Magill, and uses the traditional approach. The first designs did not make pumping motions; however I believe he has added that functionality in later designs. Others have also come up with designs to achieve this in different ways (see also, the YouTube video of Pat Miller's design).

Richard Coers first showed an approach on the American Association of Woodturners' Forum where a smaller lathe (a midi lathe) is rocked. Fundamentally, the midi lathe becomes the headstock in an ornamental lathe.

Richard's approach is to mount a rosette on the outboard side of the midi lathe's headstock. Pictures of this approach are on the right.

I've not seen the work he makes with it (I think he does pen turning on it), but I do like the idea of reusing equipment that is otherwise unused. So I took that approach and flipped it around though.

My first rose engine lathe held the rosettes on a shaft between the headstock and tailstock, and the object was held in the outboard position (the headstock was rotated 180 degrees).

Videos of my first rose engine lathe in operation are below.

Update : I have abandoned this approach, and built an MDF rose engine lathe. There are a number of reasons, but suffice it to say, the user community for MDF lathes makes the change worthwhile. 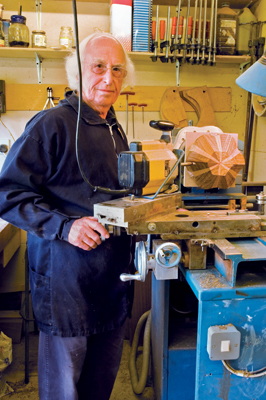 Mr. Tallack told me that ornamental turning just took too long to make a piece. So he designed a lathe that moves the object quite fast, whilst a router cuts the object.

He wrote a book about it titled, Woodturning : Another Dimension. Quite the read.

Rod had a YouTube video showing his lathe in action; however I cannot find it anymore. I watch this thing working and think, something must surely be falling apart soon. But, I've corresponded with him, and he assures me the machine is quite stable. 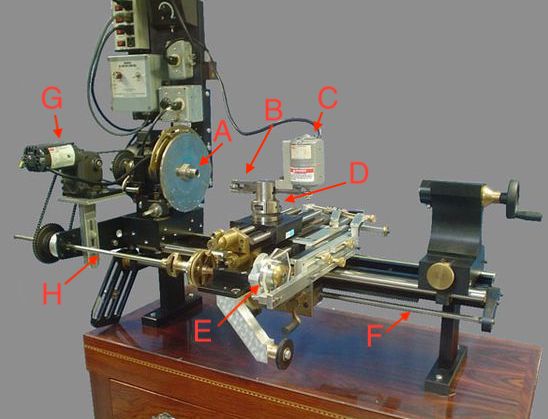 Paul Cler built a limited production lathe between 2000 and 2006 (shown in the picture to the right) which works on a different principle: namely the Geometric Slide-Rest, patented by Captain Richard Pudsey Dawson in 1870.

This approach greatly interests me.

Jean Wiggins inherited a Cler lathe from her husband. In this YouTube video, she gives a tour of her shop and lathe, gives lessons learned in Ornamental Turning, and tells stories about various past projects.

This YouTube video from cbwim implements such Cler's approach. He used linear bearings for the movement along the X and Z axes. And he is rotating the spindle by hand. Turning the spindle without automation is typical for the guilloché he's doing.

There is a good article where this approach was taken: Elementary Geometric Turning by Roger Malcomson and George Popplewell. The Society of Ornamental Turners Bulletin 146, Spring, 2022, pg. 5

Bill Ooms and Dewey Garrett are also the leading pioneers in the use of computerization as an approach to ornamental turning. Both have YouTube channels with videos worth viewing:

Bill and Dewey are very accomplished artists who have created great works. The piece that I consider to be Bill's most beautiful is shown to the right (he was very kind to share it). Dewey's work has been featured many places, and he has links to those on his web site.

In my correspondence with Bill, he has stated that he prefers the term "computer-assisted" over "CNC". His reasoning is that the use of a computer to help the artist achieve his goal is quite different from the typical use of computer numerical control (CNC).

CNC is often identified with the repeated production of given object, not one-off artistic work, but as noted in the video from Dewey, great artistic work can be done on a computer-driven lathe.

Bill documented the building of his Computerized Ornamental Lathe (COrnLathe™) on his web site. That site has a load of great information, and I won't take the time to repeat it here.

Bill is to be greatly commended for freely sharing three things :

These videos show Bill and Dewey's lathes in use: